Finally!  After threatening this radio for several months, possibly about a year, Wouxun has finally stepped up to 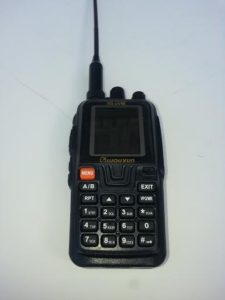 the plate and released the Triband version of the UV8D radio, which is named the Wouxun KG-UV8E.  I’ve been looking very forward to this review.

Wouxun’s UV8D and UV9D radios were very well received, although the UV9D, for the higher price, didn’t really offer much of an advantage.  Both radios have large color screens, 999 memory channels, and the UV8D does crossband repeat.  The current version of the UV9D also does crossband repeat, but when it originally dropped, this was not true.  However, the UV9D, on most websites, still costs more than the UV8D and now also the UV8E radios.  The only thing the UV9D offers that the others don’t, is extended receive range on 6 other bands, including the AM Aircraft band around the 115MHZ range.

Enter the KG-UV8E with the addition of the 220Mz band, which makes this model a real winner.  The 1.25-meter, or 220MHz, band is up and growing in the USA.  Some clubs have even put up club repeaters when they can’t get a 2-meter repeater pair.  The low noise floor on 220MHz makes this band good for longer-distance QSOs on local repeaters also.  The explosion of new 220MHz radios in the Amateur Market has created a demand for radios such as these.  I am happy to say that tests of this HT radio have been very positive, and it is now my new daily-carry radio.

Take a look at my video below for some testing of the radio and some repeater usage as well.

Not the largest I've ever shot but I'm happy #deer

Another one added to the club. #hamharder

When you open a random envelope that shows up in t

Great results from the new #solarpanels from @giga